Batteries Demystified, Part 1: What is a Battery and How Do We Use Them?

Batteries have been around for ages, but with applications ranging from renewable energy storage to consumer devices, it’s the technology that is on everyone’s lips today. But don’t dive in blind – arm yourself with this basic intro into battery technology, and you’ll have the confidence to make the right choice for your organisation.

What is a battery?
A battery is an energy storage device that uses chemicals for storing energy. Batteries can be single use or rechargeable and are constructed using various chemistries. Energy storage for solar power systems is what we will be focussing on, which necessarily requires rechargeable-type batteries.

What types are there?
There are many different types. Lead Acid (such as in car batteries), Lithium Ion (such as in consumer devices like phones and laptops), Nickel Cadmium, Saltwater and Redox Flow are just a few of the main chemistry groups. Even within the classic Lead Acid range, there are three main types – Flooded, Gel and Absorptive Glass Mat (AGM) – depending on whether the chemical is in a liquid, gel or material-soaked state. And then, these types can be further differentiated by the structure of the battery and any additives used to improve performance.

For example, a starter battery in a car is great for the high initial current needed to turn the engine over and get it going, all within a relatively compact size, but is terrible for discharging slowly and continuously over many cycles, with the deep cycle batteries used for golf carts. This is due to the structure of the lead plates, which are thin but have a high surface area allowing for a quick burst of energy.

What’s available now?
At the moment the primary types of battery for solar energy storage systems are Lead Acid Gel and Lithium Ion, like the Tesla Powerwall. Emerging technologies such as Saltwater and Redox Flow batteries are starting to be taken up but relatively rare at the moment.

Generally the price of a battery alone is around $900-$1,000 per kWh for Lithium Ion, and around $250-$400 per kWh for Lead Acid Gel. The price of batteries is slowly starting to decrease – though still currently more expensive than many consumers think, when you consider the supporting equipment like control devices that need to go with them! 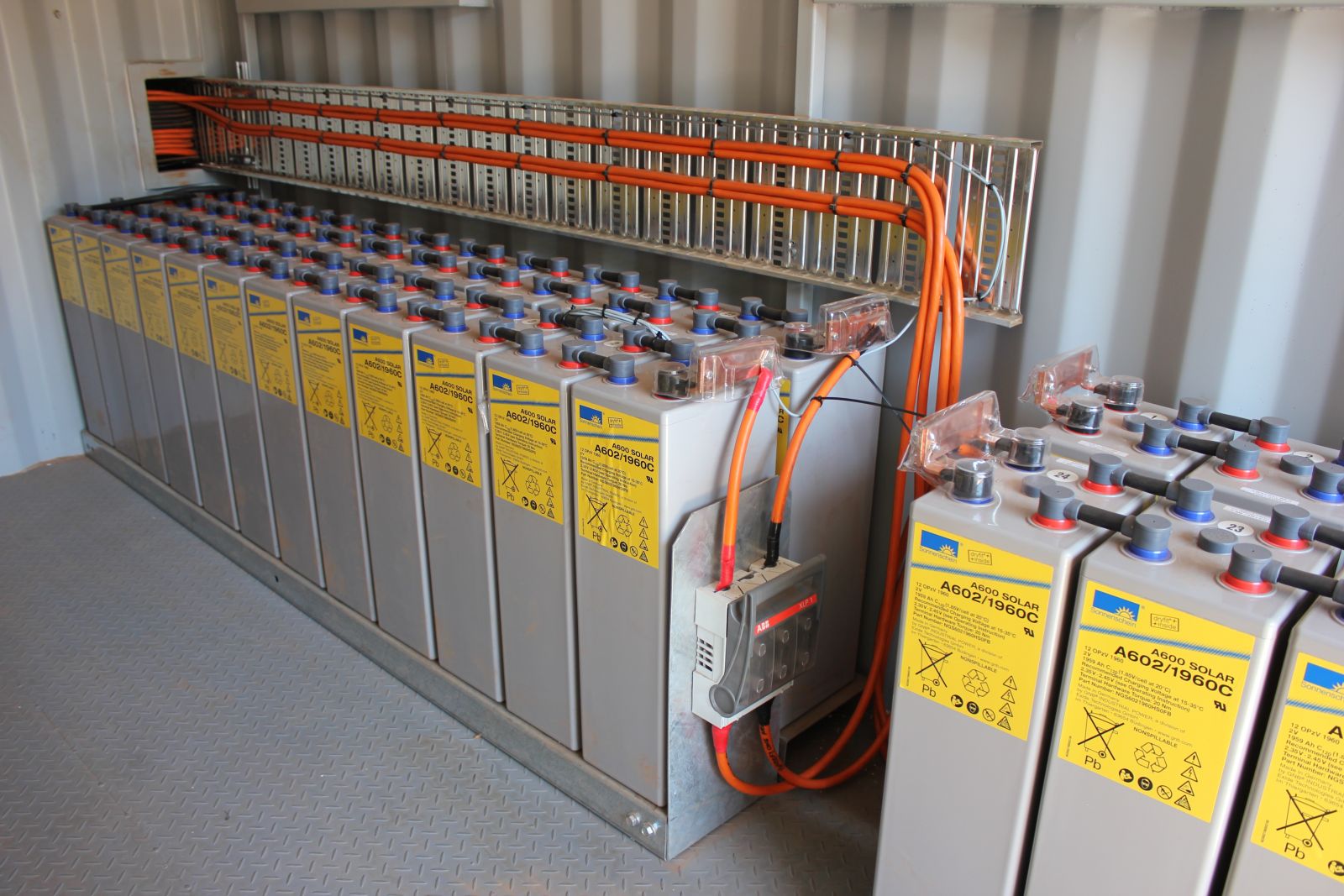 The main difference is the Lithium Ion can be discharged almostly completely then recharged and still retain a long life, whereas you should only discharge the Lead Acid 30-50% to retain a similarly long life. The size and weight of the two types also differs markedly, with Lithium Ion being far lighter and more compact, especially if you only need half the size of an equivalent Lead Acid.

There’s plenty to say about these different types of batteries – toxicity, temperature threshold, sustainability and more – but we’ll delve further into battery types in next month’s article!

How are they used?
There are three main uses for batteries in solar energy storage. The first is if you are off grid, completely isolated from mains power. Here the batteries are crucial as they keep the lights on at night and the food in your fridge cold. They need to ride through periods of cloudy weather when the solar is not producing much energy.

But if you’re connected to the power grid, the battery could provide energy during those times that the grid goes down – or simply for owners that want to reduce their grid dependence. It’s important in many cases: for sites where blackouts occur several times a year; for essential loads such as computer servers, vaccine fridges or dialysis machines; or for organisations and property developers that see the value in reducing their dependency on the grid. This grid-connected/battery scenario can even be an interim step to your ultimate goal of complete grid independence.

The battery could also be used to store energy produced by a home or commercial solar PV system during the day when occupants are out or the evening-based business is closed, and discharge during the evening and overnight when most energy is used within the house or business.

Batteries for YOUR organisation?
The reduced dependency on the mains grid is, we believe, a particularly exciting growth area. A future of “micro-grids” where clusters of buildings generate and consume their own solar power, any time of the day, is not so far away!

Batteries can also create a smoother power supply for you, therefore having a “peak lopping” effect: reducing your peak power demand and costs, depending on your load profile.

Could batteries work for you?