The German electricity sector: What happens when renewables reign?

The words “Germany” and “renewables” are inextricably linked, but how much renewable energy is actually in Deutschland’s mix – and what does it mean for people’s electricity prices & the public grid?

Germany generates around 33% of its electricity from renewable energy, a figure projected to reach 80% by 2050. Most of this comes from wind and solar, with offshore wind the next big priority. 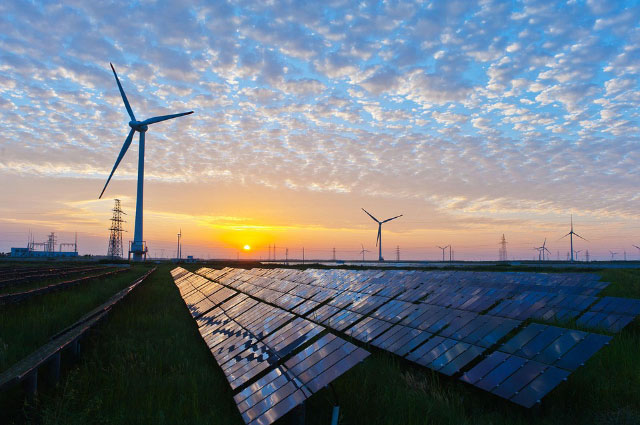 Let’s put some context around this…

Globally, around 22% of the electricity produced in 2014 came from renewables, more than half of this being from hydropower. The US produces around 13% of its electricity from renewable sources, while the EU produces 25% and China, 20%.

Australia’s current proportion of electricity from renewables is around 15%, with each state a little different. South Australia aims to increase its current 40% penetration to 50% by 2050, a percentage that Queensland aims to achieve by 2030. Victoria hopes to boost its current level of 15% renewables to 25% in 2020 – and further, to 40% by 2030.

On the national level, while there’s a bit of a policy vacuum when it comes to the pathway leading there, Australia’s Renewable Energy Target aims for 20% renewables in the electricity mix by 2020.

While countries are challenging themselves to increase their renewable consumption and reduce dependency on fossil fuels, and technical models have shown that the lion’s share of our electricity can come from high penetration renewables – both for Australia and the world – Germany’s current 33% rate is still pretty impressive.

But given the dramatic rises in clean energy sources in contemporary times, it’s not surprising that critics of the revolution have raised concerns about its technical impact on the local grid, its reliability as a supply source (energy security), and the way it hits the hip pockets of consumers.

The question is: are they justified? And with Germany one of the forerunners, it’s natural to look there for some answers.

Concern #1: Instability of the grid?

At a particular moment in mid-May this year, renewables supplied almost all of Germany’s electricity consumption.

The moment made news around the world, but what was the effect? Well, those quick to throw the first stone at renewables in the wake of South Australia’s recent blackout might be chastened to know that the world didn’t come to a grinding halt when Germany’s renewable generators supplied that 90% or so of the country’s supply – and that the grid remained perfectly intact.

In fact, studies running since 2006 and earlier show that Germany’s incidences of power outages haven’t risen at all throughout the period in which renewables increased their presence in the country’s energy mix – if anything, reducing. And local and European bodies alike have hailed the German grid as one of the most stable in the world.

A larger contributor to grid blackouts is actually the integrity of transmission lines. With 80% of Germany’s power cables buried underground (double the proportion of the US’ cables), the resulting German grid is robust against outages; Australia is even more vulnerable in this regard.

Of course, any thinking person would recognise that you can’t play switcheroo with power sources without considering the engineering impacts on the rest of the power grid. Indeed, adding renewable sources – with their intermittent nature in the absence of smoothing storage technology – means that grid operators need to manage the ensuing frequency changes, rapid ramp-ups/downs required, and other technical implications on the whole grid and other generators.

But with the right infrastructure, including smart controls and even good policy or management settings, it’s not an insurmountable task at all. Some technology investment is required but there’s no technical reason for renewables to preclude grid stability.

And what about when renewables get overexcited, i.e. too much power is pumped into the grid due to highly windy conditions, for example? Can the power lines handle it or should we brace ourselves for meltdown? A well-designed system handles the response to maintain the integrity of the grid at large, and in this case, Germany’s power lines allow it to export excess power to neighbouring countries like Norway. Anyway, generators are able to shut off in response to overload – fundamental to the engineering design.

The arguments here are well worn: What good are renewables when the sun doesn’t shine and the wind doesn’t blow and the waves don’t roll and…?

Sure, the forces of nature aren’t as predictable as the coal-firing and gas-burning activities that humans control in conventional power plants, but as explained above, this just calls for smarter grid management and power engineering.

One of the key reasons for Germany’s impressive uptake of renewable energy is the generous feed-in tariff that was implemented in 2000, starting with a 50 euro cents per kWh buyback rate. While feed-in tariffs continue to add a little load to the homeowner’s bill – around 6 euro cents per unit, amounting to $18/month on a consumer’s bill – for most Germans this doesn’t break the bank, and indeed half of Germany’s renewable energy comes from individual or community-owned clean generators.

But in fairness, the subsidy does hurt some utilities, and when the power prices went negative during the May 2016 event described earlier, effectively, commercial customers were being paid to consume electricity because there were so many electrons in the system. Not everyone was smiling.

But while it’s true that some of the cost of rising renewables in Germany loops back to consumers, why not ask the people themselves? Public support of renewables remains high (take a look at some interesting socio-cultural reasons discussed on the National Geographic website) and the country’s CO2 emissions have reduced by 27% in the quarter-century since 1991. Given the recognition of these benefits and the inevitability of transition to a greener energy future, our German friends are largely willing – and committed – to take the hits.

Most of the time, people are the winners when it comes to high-penetration renewables, both actually and as perceived. When you take a critical look at the public dialogue, it’s not surprising that the renewable nay-saying comes largely from parties with vested interests in fossil fuels or related political agendas.

Merkel and her policy-makers, as well as German businesses, utilities and other stakeholders, will be key to mitigating the “growth pains” associated with any change to their energy system – the change of extensive, rapid uptake of renewables in Germany. But the country’s achievements are impressive and its Energiewende transition, though not without some issues, is charting new ground which the rest of the world is observing and learning from with keen interest, if not emulating.

So what happens when renewables reign?

Well, so far we can say that disaster does not impend! – and certainly not by necessity, and that in fact, a blueprint is created for the future that all nations are heading towards together. The German case shows that the path to high-penetration renewables may set tongues wagging and brains cranking, but it’s entirely feasible.

What does this mean for you in WA?

Renewable energy to power your organisation or community is bankable and can provide greater energy security. The storm might’ve riddled the transmission grid in SA, but is hasn’t blown down the viability of renewables; in fact, the susceptibility of a centralised electricity system to failure from extreme weather events can be better managed using a distributed renewable energy system.

Solar, storage and microgrids improve energy security, lower emissions and can reduce costs for commercial, industrial and residential energy users. They can also optimise the current investment in the legacy grid which Western Power is so ably demonstrating today.

If you’re a land developer or property owner (health, education, retirement or aged care campuses; retail, commercial, industrial or residential estates) then do yourself a favour and at least look at the feasibility for this type of energy supply for your next project.

Come have a coffee with us soon – or maybe a Bier – because as the Germans have shown us, nothing ventured, nothing gained!