Rain, rain, go-away, I want the sun for my PV array!

There’s lots of clouds and rain in the middle of winter, but here’s some tips on how to design a PV system that is less affected by these rainy days!

There’s no way to escape it, inclement weather will always result in lower outputs from your Solar PV system than an equivalent fine day. Solar panels are relatively simple in operation, that they convert light (Visible / Infrared and a small portion of UV) into electricity. If there’s less light, there’s less electricity.

So, does that mean we just have to live with the fact that solar PV systems will output less in winter? In part, yes.

There are however, ways of increasing the output of the solar PV system to prove a better yield all year round.

When determining the appropriate system size for the site, there are 5 primary considerations:

Taking all of this into consideration, we typically scale a PV system with more DC power (Solar PV modules, kW) than AC power (inverter capacity, kVA).

If a site’s electricity consumption is not affected severely by seasonal changes, then we will typically suggest tilting the system to provide a more even distribution of power throughout the year, and adding more Solar PV modules than is required to satisfy the peak power consumption at the site.

This addition of solar panels ‘fattens up’ the generation curve of the system, meaning more power is generated during the day, even if the total peak remains the same.

Take for example, a comparison of two systems below. Both systems have the same 75kVA inverter (so they are capped at a limit of 75kVA output), but the system with more PV modules makes more power throughout the day, as the curve is fatter. As STC’s are provided on the quantity of solar modules, not inverter size, then additional certificates are generated which cover a significant portion of cost of the extra 15kW of panels. 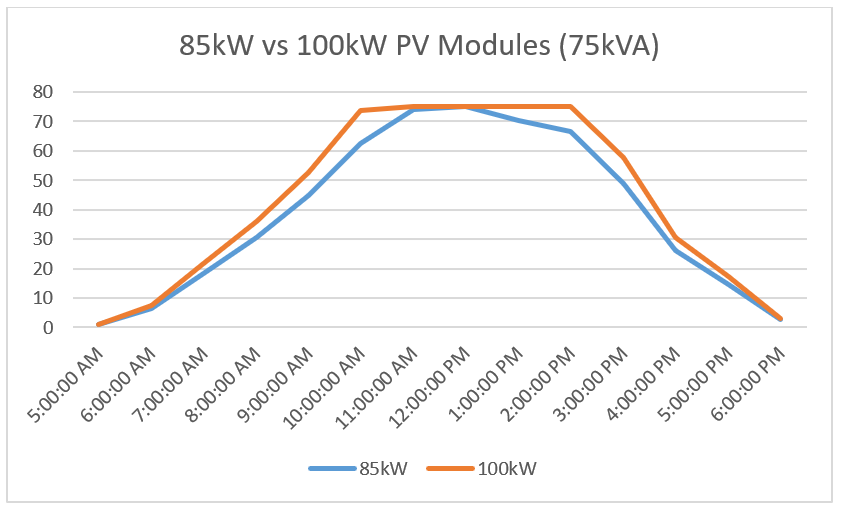 This is a system we would recommend for a site with a consistent power consumption throughout the day, as that extra energy generated before and after peak generation times will be required. It’s also beneficial during winter, when outputs are lower. The additional solar panels capture more energy, and thus provide a higher output of energy even though they don’t reach the peak.

The same system as above, but in winter: 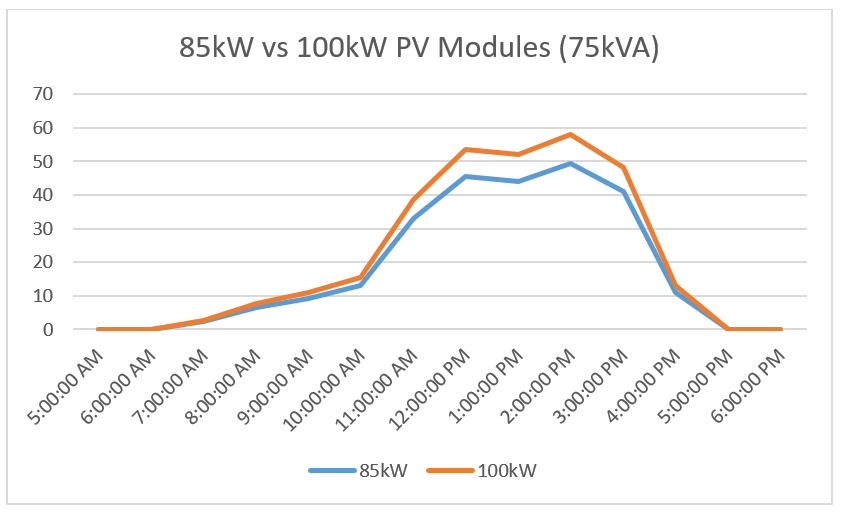 If a client’s electricity load is heavily dependent on air-conditioning usage, and is therefore seasonal, we will often recommend a flat mounted system.

Flat mount systems produce a slightly lower overall yield, but higher results in summer than a comparable tilted system. They are also less expensive, so the business case can be better for a seasonal energy user with a flat mounted system.

The chart below demonstrates the outputs of two identical systems, one flat mounted and the other tilted at 30 degrees: 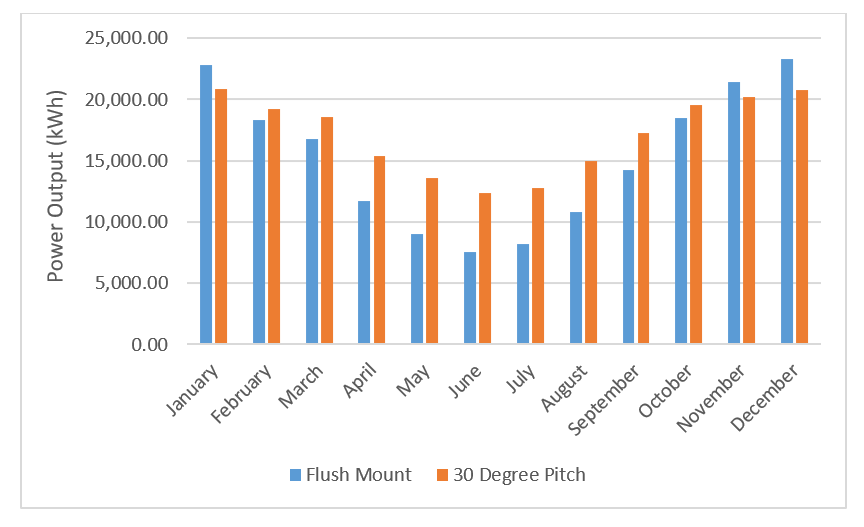 The outputs in January and February for the flush-mount system are exceptional, however this is countered by the significant reduction in output in winter. Overall, the tilted system will generate more electricity, but depending on the roof area available, cost of tilting, and the price of electricity at the site may mean the additional cost is not warranted.

From a pure generation perspective, the ideal system for winter production is a tilted system with additional modules over and above the required capacity in summer.

In reality however, the economics of the system often result in a different combination of design.

This is why system design and construction is best left to the experts from CEC Accredited Retailers – if you have a question give me a call at the office on 0894295111.