State of the climate 2018: Report at a glance

If there was ever a reason to commit to a new years resolution to power your organisation with renewable energy, the report from the Bureau of Meteorology (BOM) and CSIRO’s joint biennial State of the Climate report which has just been released could be the one. Dr Helen Cleugh, the director of the climate science centre at CSIRO, said the last time the planet saw levels of CO2 this high was at least 800,000 years ago. 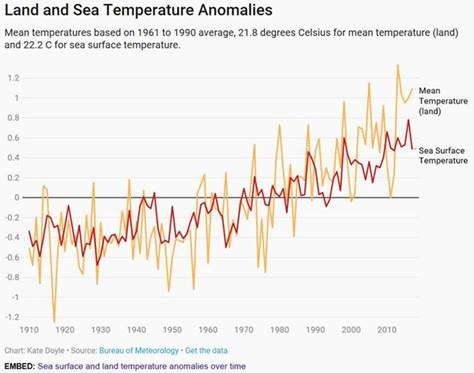 According to the study, eight of the 10 warmest years of sea surface temperatures have been recorded since 2010 contributing to coral bleaching, oceans acidifying and altering the habitats of different species. Mr Oosting said Australia was recently ranked the fifth worst performing country in the world when it came to climate action. The 2018 Climate Change Performance Index ranked Australia 55 out of 60 countries for climate change action, putting it in the same group as the United States and Saudi Arabia.

It’s easy, profitable and cash flow positive for your organisation to contribute to efforts that address climate change in 2019 – power your business with renewable energy.  See this article for how to: 8 comparative steps needed to use energy for improving your business