2015 saw a substantial increase in both number and size of our commercial solar PV projects. We think because of low risk purchasing models, low funding costs and increased benefits. These are our top five for the year.

A Western Australian Catholic college will now access about 30% of its energy needs from rooftop solar, showing how solar makes good savings sense for schools across Australia.

Corpus Christi College is expected to save more than $1.5 million on its energy bills over the 25-year life of its 168 kWP solar PV system.

Enigin arranged funding for the $300,000 upfront cost of installation through an Energy Efficient Loan, a joint initiative of the Commonwealth Bank and Clean Energy Finance Corporation (CEFC).

We used custom in-house designed and built grid protection equipment to comply with Western Power network requirements and ensure that the system operates at all times to maximise yield.

Check out our awesome aerial shot taken with a Go Pro! 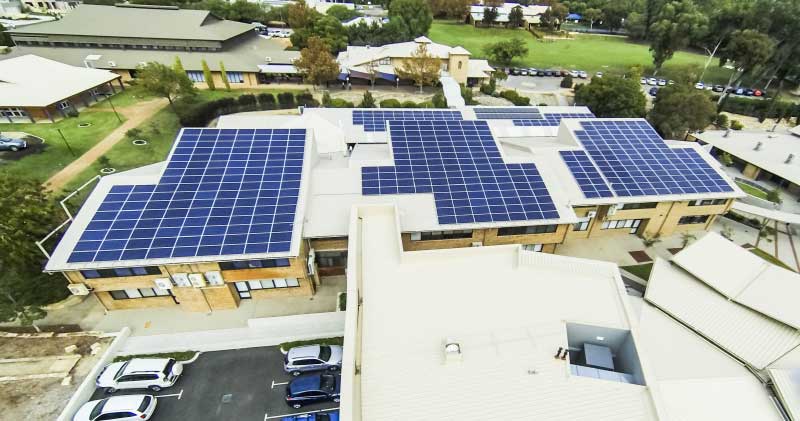 Following on from our success with the PV system for Gilbert’s Markets Midland in 2012, the owner Gilbert Correia asked us to install a 99 kWp system on his brand new fruit and vegetable store in Mandurah.

396 Canadian Solar modules were deployed to just squeeze onto the available roof space. This was combined with six SMA Sunny Tripower inverters, and a transformer was also used to filter out all DC produced by the transformer-less inverters.

Speaking of return customers, this was a 70 kWp expansion to a 30 kWp system we installed on the Winthrop IGA supermarket in 2013.

An additional challenge to the regular grid protection requirements was Western Power’s ruling that solar PV systems over 30 kW shall not inject any DC onto the electricity network. As a result, a German-manufactured power transformer with 125 kVA capacity was imported and deployed to filter all DC from the PV system. The DC injection ruling has since been amended and systems rarely need transformers to filter out the DC.

In collaboration with our friends at Renewable Energy International, we supplied and installed a complete 99 kWp PV system for the Beta Spuds warehouse in Mandogalup. This was constructed with 396 Jinko modules, four SMA Sunny Tripower inverters, an SMA Cluster Controller and in-house designed and built grid protection equipment to comply with Western Power network requirements.

The Cluster Controller allowed the system to provide load following so that no power is exported, preventing the grid protection from isolating the system due to the anti-exporting requirement of Western Power. This ensures the system is operating at all times to maximise yield.

5. Chamber of Commerce and Industry – 40 kWp

Following our success with a 38 kWp installation on top of the CCI building in the Perth CBD, the Chamber of Commerce and Industry engaged us to install a 40 kWp PV system on their Kwinana Industrial Training Facility.