YOU the Electricity Supplier: Microgrids under the Microscope

We’re seeing an interesting trend: Large power stations are no longer the grand poobahs of electricity generation. Welcome to the age of the microgrids! Land developers and owners of property portfolios, take note, because the commercial opportunities here are just as exciting as the technical feats.

The main electricity grid is an important part of the way we deliver electricity to our businesses and homes. Big power stations produce electricity that is shared by everyone connected to the main grid. As you probably know, this grid is owned and managed by Western Power.

While the main grid plays a central role in transmitting and distributing electricity, we’re seeing an interesting trend in which large power stations are no longer the kings of our electricity generation landscape.

Whether it’s solar PV, wind farms, or other smaller-scale systems (renewable and otherwise), alternative players can participate in the big power stations’ business of converting energy from fuels or renewable sources into electrons that power our buildings and lifestyles.

I’m talking, of course, about YOU!

A “consumer” is someone who uses electricity. A “prosumer”, on the other hand, is someone who not only consumes electricity but produces it themselves. So really, anyone with a PV system on their roof or a backup diesel generator is considered a prosumer.

If that’s you, you’re riding the wave of what’s trending in the electricity market today (and our society more broadly, where it’s all about consumers taking control, and everything from electricity supply to growing your own veggies is being democratised).

But we can take this concept further.

What if you not just “produced” and “consumed” your own electricity, but shared that with the people around you? What if your PV system pumped out more than you need, and you could sell that electricity to other consumers? Well, that already happens in a sense: Anyone with a PV system who generates more electricity than they need automatically exports the surplus to the grid, where it’s up for grabs by everyone connected to the Western Power network. Depending on your situation, you might receive a small thank you payment called a feed-in tariff for your contribution (6-7c per unit).

A microgrid takes the “prosumer” concept and scales it up.

A microgrid is a small section of the grid in which one or more generation sources (like a large solar PV system) powers a defined area, which is made up of multiple consumers, and controls this little network via smart technology that manages the way that the energy flows between all these points. 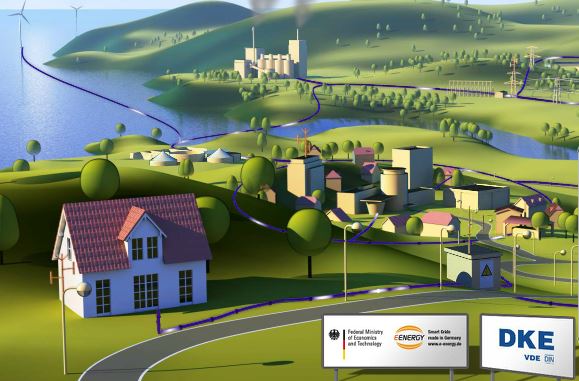 Glimpse of a microgrid from DKE/VDE’s E-Energy landscape, an interactive animation showing consumers generating and sharing their own electricity. Play around with different scenarios and revel in that prosumer feeling!

A microgrid is often still connected to the main grid, but only at a single connection point – which means that the electricity generated within the microgrid is first shared between all the different consumers within its scope, and only if there is extra left does it export the rest to the main grid.

Battery storage is often a key part of a microgrid, letting these microgrid consumers get the most out of their embedded generation source.

Think of it as a collaborative self-sufficiency. Almost. The network control technology (the “brain” of the microgrid) lets the consumers sip from the main grid whenever the microgrid isn’t generating enough to meet their demand.

So where would you set up a microgrid?

…And why would you want one?

The big drawcard is its ability to reduce the network requirements of that area. In other words, areas within a microgrid are less reliant on the main grid, and if this is taken into account at the infrastructure planning stage then you can really cut down on the “poles and wires” that Western Power needs to set up to bring electricity to your place. (So it can benefit them too.)

This, as you can imagine, is absolute gold for developers as it can reduce their land development costs significantly. This benefit flows on to customers who may then enjoy cheaper (or free) electricity and more affordable lots – and back to the developers, as they enjoy the better business from their microgrid-powered development.

And for property portfolio managers, you can even twist the concept of a microgrid into something called an “embedded network” – basically a microgrid in which one party sits above the others and acts as the retailer within the microgrid, on-selling the electricity generated to individual consumers.*

Microgrids are a perfect fit for remote or “fringe of grid” areas, where there isn’t a well-established main grid connection or the grid lines there are rated at a low capacity, perhaps because the area isn’t very well-developed. Yet.

So imagine how valuable a microgrid is for these new development areas – and the clean energy proliferation, CO2 reductions and huge dollar savings that result from it for so many parties.

As the big power stations wriggle aside to make way for emerging distributed generation sources – embodied in the microgrid concept – it’s truly the future we’re facing: power in your hands!

(*In reality, the phrase “embedded network” can be a tad more complex then this, as different regulations apply to different customers – and people can get hung up about the terminology too!)